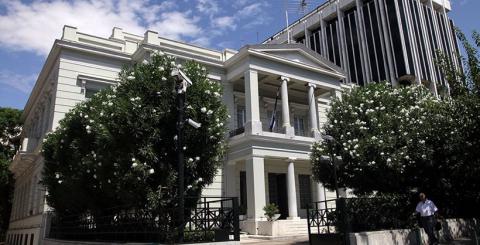 In an effort to muffle criticism and opposition voices on the controversial arms deal with Saudi Arabia and the implication of Defence Minister Panos Kammenos in the case, the Greek Foreign Ministry issued a public appeal to Greece’s opposition parties on Wednesday, to “behave responsibly” and refrain from leaking classified secret documents in ways damaging to the nation’s interests, in order to “serve petty political ends.”
A ministry announcement noted that Foreign Minister Nikos Kotzias had “with great patience and a sense of responsibility heretofore kept silent on this issue, in order to safeguard national security and the nation’s interests,” and was now put in the unpleasant position of making a public announcement.
“Foreign policy and the country’s national interests supersede any party rivalry and conflicts. It is not, therefore, tolerable for the opposition to violate the penal code that it has itself passed and the National Security Regulations that it adopted in June 2004,” the foreign ministry said.
The announcement cited article 146 of the penal code, even warning of prison sentences of up to 10 years for those that illegally allow sensitive documents, plans, news or other information that needs to be kept secret from foreign governments so as to protect the interests of the Greek state and its allies, to come into the possession or knowledge of others.