Around Hundred People with T-shirts of Bulgartabac Protest in Sofia 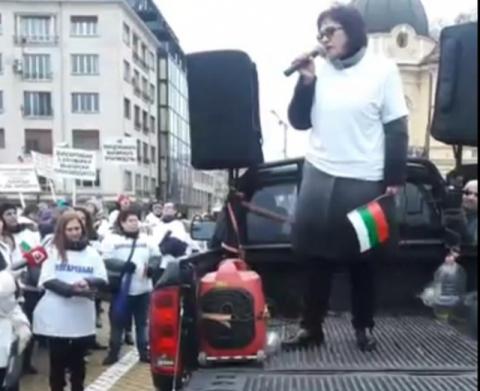 Around hundred people dressed in white T-shirts with the inscription "Bulgartabac" positioned themselves in front of the offices of the online editions of "Dnevnik" and "Capital" this morning and blocked Ivan Vazov Street as part of a protest in downtown Sofia this morning, say from Dnevnik.

They wore whistles and some other devices that made noise. The protest passed through the sounds of a whirling cheer, but without chanting.

The posters of the gathered people were titled "We are not smugglers", "We make our bread honestly" and "Ivo Prokopiev - the thief calls" Catch the thief ".

There was an enhanced police presence before the editions of Economedia.

The event lasted for about 20 minutes, after which the group continued its march to the parliament building.

The protest was organized after yesterday the company's management accused the co-founder of Dnevnik and Capital Ivo Prokopiev that the publications in the editions negatively affect the company and endanger the jobs of people working there.

Early in the morning buses brought people wearing Bulgartabac T-shirts in the parking lot at the National Stadium "Vasil Levski". From there, the group split into two - one of them came to the headquarters of the "Yes Bulgaria" party, which, according to the management of the holding, also contributes to the bad image of Bulgartabac. Later the same went through the editions of Dnevnik and Capital.

The other passed through the Orlov Bridge and reached the building of the National Assembly, where a rally is currently taking place.