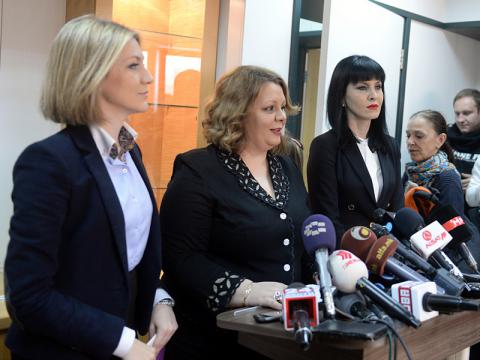 The first new investigation, codenamed "Stranski Sluzbi" [foreign services], is probing a former deputy interior minister and an employee in the secret police for suspected misuse of office for faking a tendering procedure for procurement of police equipment late in 2014.

Special prosecutor Fatime Fetai said the two suspects in November 2014 commissioned a "false" report from the foreign company that would confirm the thesis of the then government about the illegal wiretapping allegations, revealed in 2015 by the then opposition Social Democrats.

Former Prime Minister Nikola Gruevski at that time claimed he had not ordered the illegal wiretapping of thousands of people - and that unnamed foreign services had carried out the eavesdropping using "yellow vans" equipped with surveillance equipment. The incriminating material was then supposedly given to the opposition in order to destabilise him.

According to the prosecution, the foreign company that wrote the report backing Gruevski's thesis, just one month later, in December, won a fake tender for the procurement of the police equipment.

Fetai said the suspects carried out the fictive tendering procedure involving three bidding companies in record time, in just over five days, and "the preliminary findings suggest that they [the bids from the companies] were written by one person".

She is suspected of illegally acquiring some 100,000 euros from the state budget...