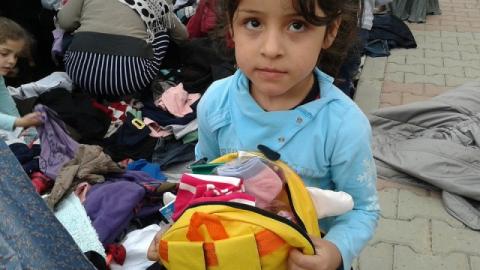 Around 10 people were rushed to hospital on Lesvos on Tuesday night following violent clashes between rival groups in the Moria refugee and migrant camp, Ekathimerini reported.

Riot police were called in to quell the unrest, which reportedly broke out between rival groups of Iraqi and Afghan nationals and resulted in several small fires being set.

Tension is rife at Moria, where scant resources are being stretched at almost three times the camp's capacity and conditions are squalid. Among its 6,000-plus residents there are around 300 to 350 unaccompanied minors and hundreds of children, women and elderly and disabled people.

Tuesday night's clashes came a day after American news outlet BuzzFeed and Germany's Deutsche Welle published videos of the camp's interior showing the extent of the filth and squalor to which residents are being subjected.

Journalists are not allowed into the military-run camp without the prior agreement of authorities, so the exact extent of Tuesday's and other similar clashes are not known