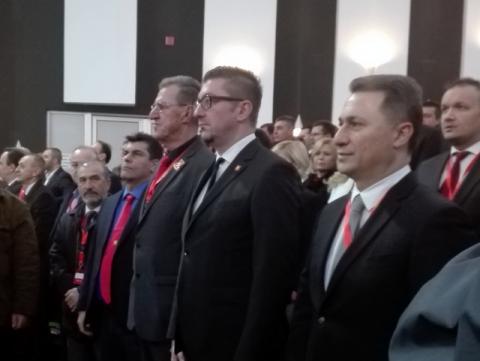 Mickoski, who previously held the post of secretary general in the party, won 376 votes out of a possible 428 from delegates present at the party congress in the southeastern town of Valandovo. He was the only candidate standing.

Some 130 delegates, including former and current high-ranking party members and MPs were absent, highlighting a hidden split inside the party which run Macedonia's government for the past 11 years until May.

They previously complained that the election of a new leader was rushed and rigged in favor of Mickoski, who they saw as no more than Gruevski's puppet.

"To the inept briefings [coming] from 'unnamed' party sources, that I will be a puppet, I will respond with my work and I am sure I will prove the opposite," Mickoski said at the congress, calling party members to unite against "harmful policies" being put forward by the current Social Democrat-led government, SDSM.

Mickoski is a relative newcomer to the political scene, and the wider public first hear about him when he was appointed party secretary general in July this year. This  was part of a broader leadership shuffle that happened just after the party was ousted from government in May, amid widespread concerns about corruption and authoritarianism.

Ever since then, rumours started circulating that he would succeed the long-standing party leader Gruevski, should Gruevski opt to resign. He did so last month after a crushing party defeat in local elections in October.

"I am aware of all the doubts about me which are somewhat justified due to the fact that I have never made any important stately decisions," Mickoski added.

VMRO-DPMNE is facing one of the hardest periods in its recent existence. It is presently suffering...