A Polish Sailor Discovered after Seven Months in the Indian Ocean 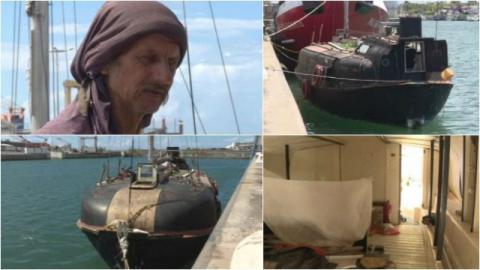 A 54-year-old Polish sailor was found in the Indian Ocean near the French island of Reunion (east of Madagascar) after he took a lifeboat trip seven months ago and lost his orientation and management, France press reported.

The shipwrecker, called by the media only with the name Zbigniew, survived by eating half a pack of Chinese soup a day and a little fish that he could catch.

The sailor was spotted by a sailboat crew who alerted rescuers on the northern coast of Reunion. The gendarmerie understood from the adventurer that in May he was leaving the Comoros (in the Mozambican promenade between East Africa and Madagascar) and intended to go to South Africa to look for a job. But soon his boat broke down, his naval tools stopped, his mast crashed, the steering gear - too. So he stayed at the will of the currents, the wind and the waves, hoping someone would notice it. They dragged him between the Maldives, Indonesia and Mauritius in the Indian Ocean. During the long journey, his cat survived.

IMANY with Two Big Concerts in Sofia and Plovdiv in June

FM's plea to another country to reconsider Kosovo decision

The Bad Weather in Spain Took the Lives of 10 People