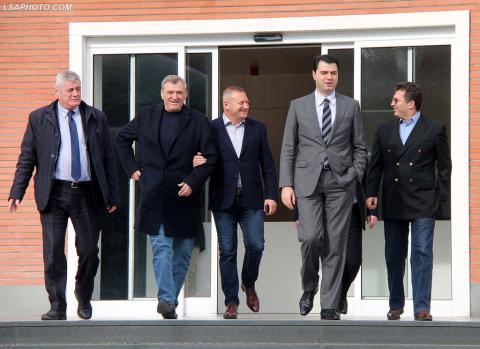 Head of the Democratic Party Lulzim Basha (second from right) with his smaller allies at the gate of DP offices in Tirana on 8 January 2018. Photo: Malton Dibra/LSA

The head of the Democratic Party, Lulzim Basha, met his junior partners from the Socialist Movement for Integration, LSI, on Monday and warned that their joint political action, which started with protests in parliament last year, would now be "intensified".

Monika Kryemadhi, chairman of the LSI, said in a separate meeting that her party would collaborate with the Democrats in "a series of protests" that would aim to "overthrow" Prime Minister Rama.

Both parties held a protest in the parliament that turned violent last December, claiming that Rama's Socialist Party was violating the constitution by electing a temporary General Prosecutor in the last session of the year.

Opposition MPs let off smoke bombs while their supporters clashed with police forces outside, hoping to block the vote on the temporary General Prosecutor.

After their attempt failed, the opposition then vowed to renew their protests in January. Neither Basha nor Kryemadhi announced a date for the next protest.