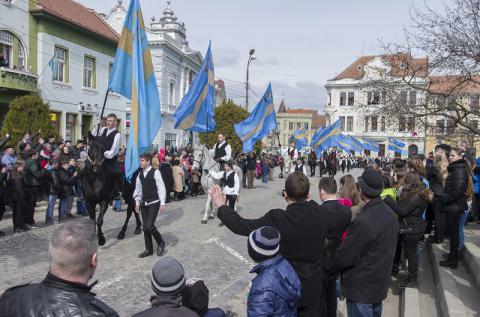 Romania's main ethnic Hungarian parties on Monday signed a joint declaration that sets out a common political agenda, including a demand for autonomy in those parts of the Transylvania region where ethnic Hungarians are in the majority.

The statement comes as Romania prepares to mark the hundredth anniversary of the "Great Union", when Romania annexed Transylvania following the collapse of Austria-Hungary.

They said they wish to negotiate three types of autonomy - territorial, local/administrative and cultural.

"These three types of autonomy have to be discussed as soon as possible, even in 2018, with the Romanian majority and translated into legislation," Kelemen Hunor, leader of the Democratic Union of Hungarians in Romania, the largest ethnic party in Romania, said.

He also said that while autonomy would help to preserve the ethnic identity of the Hungarians in Romania, it would also "contribute to the development of society in Romania."

Autonomy elsewhere "has worked and is still working in many European states and is the key of development", he added.

The Democratic Union of Hungarians in Romania holds 30 seats in parliament and is an ally of the ruling Social Democrats in the legislature.

Although not formally part of the governing coalition, the ruling Social Democrats need the votes of the Hungarian MPs for legislation that demands an absolute majority in parliament.

The Hungarian party tried last year to push for legislation that would boost Hungarian rights.