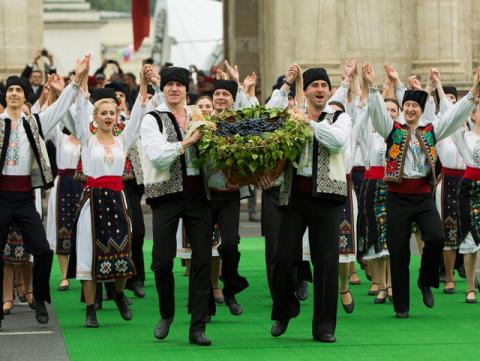 Despite a Russian embargo, Moldova is making more money than ever from from exporting wine - one of the country's most important products.

The wine industry is very important for the country's economy, accounting for 3.2 per cent of its GDP and 7.5 per cent of total exports, and employing thousands of workers in about 140 companies. The country has the biggest density of vineyards in the world, covering 3.8 per cent of its territory and 7 per cent of its arable land.

Meanwhile, data published on Tuesday by the National Bank show that in the third quarter of 2017, Moldova exported 46 million US dollars of wine - 13 per cent more than in the same period in 2016.

All top five purchasers were Western or Central European countries. The largest quantities of wine went to neighbouring Romania, which spent 3.46 million US dollars, followed by Poland, which spent 3 million dollars.

At the same time, sales to Russia fell by 30 per cent, and a possible recovery the market there looks almost impossible because Moldova has lost its place in Russia to wines from Chile and Argentine, which are also cheaper.

Moldovan wine exports to Turkey fell even faster, by 48 per cent, and by 12 per cent to Georgia.

The crash in the Russian market is blamed directly on the embargo Russia imposed on Moldovan goods, wine included, in 2013 - just before Moldova signed an Association Agreement with the EU that Moscow strongly opposed.

The Kremlin embargo does not affect the breakway pro-Russian region of Transnistria, or the autonomous region of Găgăuzia, where the local authority is also seen as pro-Russian.