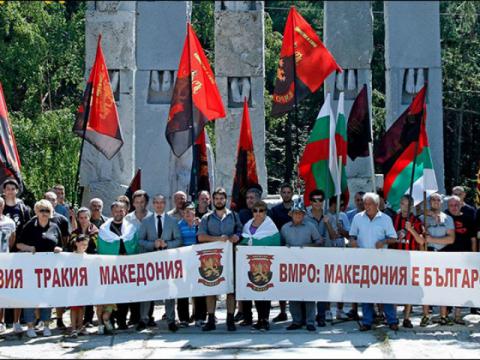 Bulgaria's nationalist VMRO-BND party has joined the dispute between Macedonia and Greece over Macedonia's name, accusing Greece of trying to "usurp" the term Macedonia exclusively.

The party led by Defence Minister Krasimir Karakachanov confirmed its statement published on Sunday on its website was official.

"The position was adopted by the National Council of the party on Sunday. Of course he [Karakachanov] is aware of it," a spokesperson told BIRN on Monday.

The statement on Sunday, entitled, "Greeks, you are not entirely right about Macedonia", came after about 90,000 protesters took to the streets of Thessaloniki, in Greece, carrying flags and banners reading: "Macedonia is Greek".

They denounced moves to reach a compromise with Macedonia over its name that include the latter continuing to use the word "Macedonia", even in compound form, in its name.

VMRO-BND is a part of the United Patriots parliamentary group - alongside Ataka and the National Front for the Salvation of Bulgaria - which is a junior partner in the government in Sofia.

The party said it understands Greek claims that the name Macedonia does not belong to the country ruled from Skopje - but does not see why it should not be used in a compound form.

"We Bulgarians can also claim these names and places, but we don't because we believe the road ahead is one of camaraderie and magnanimity, not one of holdbacks," the document says, recalling Bulgaria's historic claim to Macedonia.

"Why would Athens wish to monopolize on this name? Didn't thousands of people you now call 'Slavic-speaking Hellenes' die with this name in their mouths?" the party asks, accusing Greece of wanting to completely usurp the name "Macedonia", which it said "cannot be tolerated"....