Iraq: Locals want US troops out 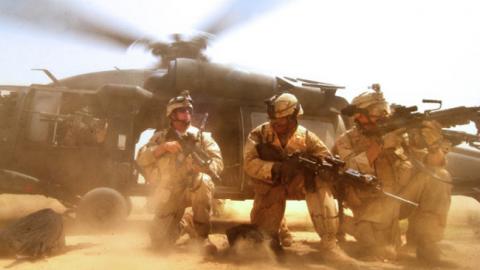 Locals recounted grizzly details of a US-led coalition attack that reportedly killed at least 8 Iraqis Saturday, calling on American forces to leave the country. The Coalition said the incident is under investigation.

"We demand the departure of the American forces for having trampled upon the blood of children and civilians," Al-Sheikh Qater Al-Samawad, a Member of Al-Obeid tribe in Al-Anbar told RT following the alleged strike.

At least eight Iraqis were reportedly killed and 20 wounded in the botched raid conducted by US-led coalition forces operating in Al-Anbar province, according to reports. Local police said civilians and police were wrongfully targeted by a Coalition air strike after Iraqi forces misidentified police vehicles as part of a terrorist convoy.