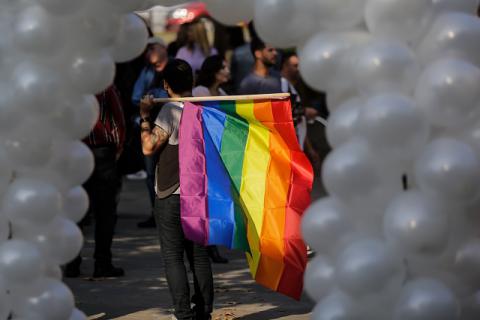 Members of the Romanian LGBT community expressed renewed concerns over increasing harassment and intimidation after a group of Romanian right-wing activists interrupted the screening of a French AIDS activism film on Sunday evening.

The protesters sang Romania's national anthem and went onto the stage carrying banners with slogans such as "Romania is not Sodom and Gomorrah".

They said that it was "inadmissible" that a movie about homosexuality to be screened. The film tells the story of activists who campaigned for access to AIDS treatment in France in the 1990s.

Award-winning Romanian director Tudor Giurgiu, who was in the audience, posted a video of the right-wingers' incursion on Facebook.

"I never thought this would happen to me… We listened to religious songs and I still feel it is surreal that this can happen today in Romania," he wrote.

"I suggest that from now on, cinemas screening 'gay movies' have protective suits, helmets, shields and so on," he added.

According to LGBT rights organisations, Sunday's protest is far from being an isolated incident, but part of a wider trend over the past two years.

They said it started when the church backed the Coalition for the Family NGO collective's campaign to change Romania's constitution so that it would include the definition of marriage as a union between a man and a woman. If adopted, the move would ban same-sex marriage.

The Coalition for the Family managed in 2015 to raise the three million signatures necessary to submit a bill to change the...

Tourism - Where did Bulgarians Travel in September