Panic at Wall Street: The Dow Jones Index Collapsed. This is the Biggest Drop Since the Financial Crisis of September 2008 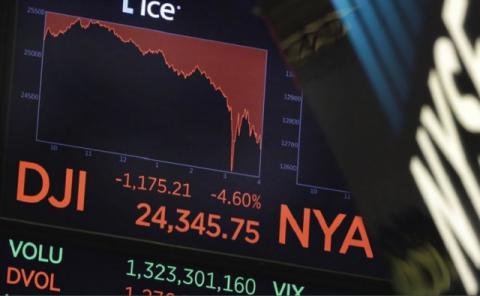 Broadcasted on TV, the Dow Jones crash caught the attention of passerby in New York. After a slight increase following the collapse, Dow Jones lost 4.6% - the biggest decline since the financial crisis of September 2008

The White House reacted with the assurance that President Trump's attention is focused on the long-term fundamentals of the economy, which remains extremely strong.

"Dow Jones" has followed other indexes. This morning, a decline of more than 4 percent followed the Tokyo Stock Exchange, where the Nikkei Index lost 929 points - the lowest value since October.

The moment Dow Jones collapsed, President Trump spoke at an event in Ohio, but he did not say a word about the exchanges. Trump has not failed to boast whenever indices rise, analysts note.

The fall of the Wall Street coincided with the inauguration of Jerome Powell, the new president of the Federal Reserve Authority. After taking an oath, Pawel said the US financial system was stronger and more resilient than it was before the financial crisis in 2008, the National Television also said.

Panic has hit Wall Street and leading trade indices sink deep into red territory after a wave of mass sales, according to CNBC.

Analysts, quoted by Market Watch, commented that Donald Trump's "honeymoon" in the financial markets has ended. They recalled that investors responded positively to President Trump's election as President of the United States at the end of 2016 and his promises of major reforms.