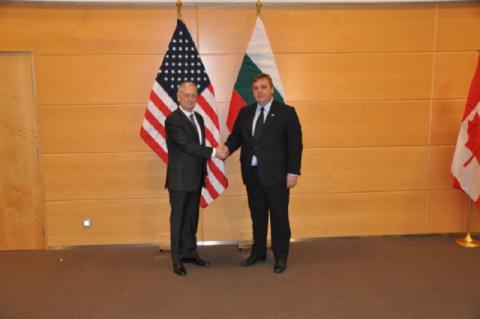 A meeting between Bulgarian Defense Minister Krasimir Karakachanov and James Matisse, Secretary of Defense of the United States, was held in Brussels today, February 15, in the framework of the NATO Defense Ministers' Meeting in Brussels.

During the talks, topical issues of bilateral relations were discussed. Both sides expressed their interest in significantly expanding and deepening cooperation on a wide range of topics, including the realization of the Bulgarian Army modernization projects. The Secretary of Defense of the United States gratefully accepted his invitation to visit Bulgaria.

The two ministers also discussed key topics on the agenda of the Alliance in the context of the expected decisions of the NATO summit in July 2018.

Recognizing the role of Bulgaria as President of the EU Council, Minister Karakachanov and Minister Matisse exchanged views on the processes of strengthening European defense within the EU and NATO-EU interaction.

On February 16, Defense Minister Krasimir Karakachanov will join the Bulgarian delegation headed by Prime Minister Boyko Borisov, who will take part in the Munich Security Conference.