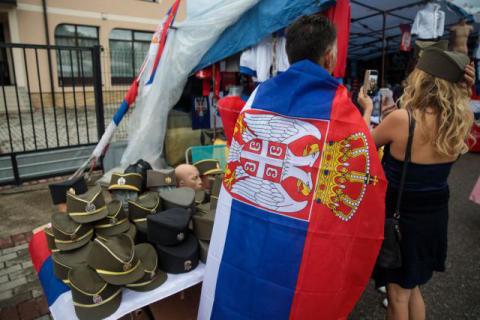 The RS and Serbia will establish a national council for preservation of the identity of the Serb people.

Tanjug reported this on Friday, citing the daily Glas Srpske, published in the Serb Republic (RS), the Serb entity in Bosnia-Herzegovina.

The newspaper said it had seen the document that states the RS and Serbia will act jointly and in an organized manner to implement a series of measures to prevent the assimilation of the Serb people.

This agreement - previously referred to as a declaration, was to be presented on Thursday, during Serbia's Statehood Day - but Serbian President Aleksandar Vucic "asked that this be postponed for several weeks in order to receive broader international support."

RS President Milorad Dodik and Vucic announced such an agreement last year, due to the need to define the way to fight for the survival of the Serb people.

It should soon be adopted by RS and Serbian parliaments, while the RS government has already given its consent to the proposed text.

As measures to prevent the assimilation of the Serb people, the document cites, among other things, close ties with the home state, i.e., Serbia, strengthening the awareness of the common origin, preserving and fostering Serb culture and national identity and accelerating economic development.

The preservation and cultivation of Serb culture and national identity consists of exercising the right to use the Serbian language and the Cyrillic script, the right to express, study and develop Serb culture, study national history, foster the heroic, righteous and freedom-loving traditions of the Serb people and mark national holidays, it is stated in the agreement.

It also envisages the establishment and implementation of unified Serbian language, history, literature and culture school curricula. According to this, relevant...