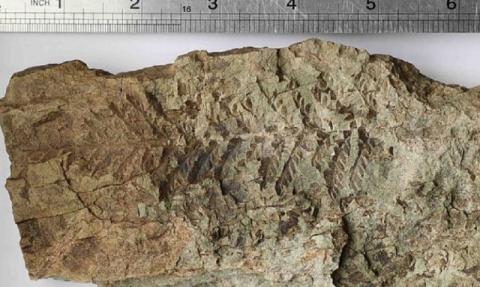 A Bulgarian team of geologists found Antarctica fossils of plants from the "youth" of our planet - proof that the white continent was once green.

One of the tasks to our Antarctic expedition was a detailed study of the rocks of Cape Hannah. It is 12.5 km straight from Hurd Peninsula, where the Bulgarian Antarctic Base "St. Kliment Ohridski" is located.

As the fastest access to the nose is by water, with the help of commander Eng. Yordan Yordanov, the geologists reached the nose with a motor boat "Zodiac", then made a camp on the shore.

Previous studies of the area made by British and Chilean researchers are sporadic and far less detailed.

Bulgarian geologists explored in the northern part of the nose which free from snow and ice territory. There they found many plant fossils and thin carbon levels.

Found fossils of plants are about 86 million years old - from the late chalk. They have been stored in green thin-layer sandstone with a fine and medium-grained structure.

It is mainly the remains of the naked seed plants, which were dominant at the end of the late chalk. Prints of carnivorous plants that have appeared in the middle of the early chalk are rare. It is only in the later epochs that they have flourished to be dominant today in the plant world of the planet.