UEFA boss Čeferin: I respect everyone, but fear nobody 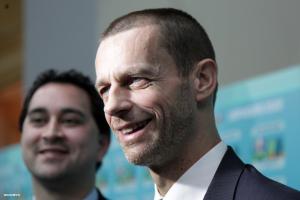 In an interview with the STA on the sidelines of a UEFA congress in Bratislava, Čeferin confirmed he would run for another term in 2019 and added that "it presently appears as if there will be no rival candidate".

Using the momentum of a new leadership style instituted since his election, Čeferin has pushed through a wide-ranging reform agenda in UEFA often with unanimous support from the national associations. He is currently eyeing changes which he says are aimed at restoring financial balance in club football.

Turning to concrete policies, more specifically to the recently signed agreement on closer cooperation with the European Commission, Čeferin said "everyone sees that the balance in European football is upset, some clubs are getting richer and richer while others are getting poorer".

"Something needs to be done about this, this is the biggest issue...