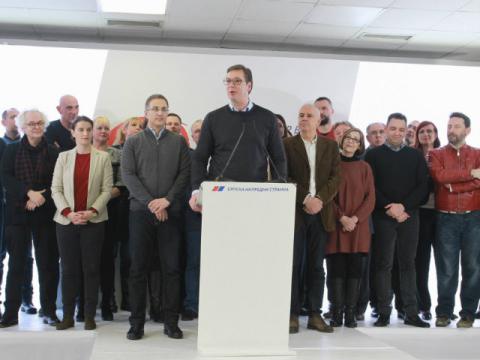 After the Serbian Progressive Party won the most votes in Belgrade City Assembly elections on March 4, Serbian bookies are suggesting that senior party official Irena Vujovic is the most likely to become mayor of the capital.

Meridian Bet, one of Serbia's biggest betting companies, is giving the best odds - 1.7 to one -on Irena Vujovic, a Progressive Party member and the current head of the city's Savski Venac municipality.

She is followed by the first person on the Progressive Part's electoral list, Zoran Radojicic, with odds of three to one, and current Belgrade mayor Sinisa Mali with 3.5 to one.

They are followed by Belgrade's city manager, Goran Vesic, who has odds of four to one, and Aleksandar Antic, the candidate of the Serbian Socialist Party, the Progressives' allies on the national level, with odds of 11 to one.

However, Socialist Party chief Ivica Dacic has said that his party does not wish to provide the capital's next mayor.

"Even if [President Aleksandar] Vucic offered us [the mayoralty], it is not necessary. We didn't deserve it. They won, so they should provide the mayor," Dacic said on March 5.

The Progressives won 44.9 per cent of votes cast, which translates into 63 seats. That means the party can form a city government without needing a coalition partner.

The electoral list led by former mayor Dragan Djilas came second, winning 18.8 per cent of the vote and getting 26 seats in the city assembly.

The list led by Aleksandar Sapic, the head of the New Belgrade municipality, scored 9.3 per cent and got 13 seats.

The Socialist Party won 6.1 per cent and will have eight seats in the assembly.