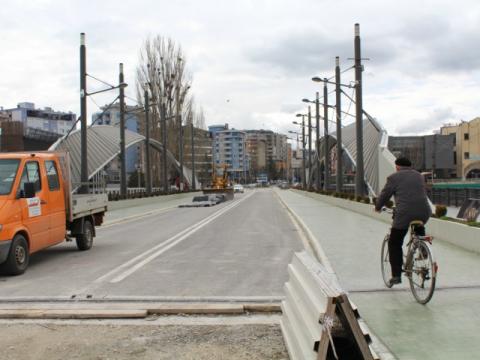 Less than a year after construction of the final work on the bridge dividing the southern and northern parts of northern Kosovo town of Mitrovica was interrupted in April 2017, work on completing the bridge has started again.

Since the Kosovo war in 1999, Mitrovica has remained a divided town, with line of separation between Albanian majority in the south and Serbian in the north along the Ibar River.

The main bridge over the river has remained a flash point for numerous incidents following the armed conflict - and is a symbol of Kosovo's ethnic division.

Reopening Mitrovica's Ibar Bridge for traffic was one of major topics of last week's technical EU-led dialogue between Belgrade and Pristina in Brussels.

While restarting work on this symbolically important bridge has been praised by EU officials in Kosovo, it has been met with unease by the authorities in the Serb-dominated part of the town.

At yesterday's session of municipal assembly, Goran Rakic, Mayor of North Mitrovica, marked the restart of works on the Ibar Bridge as a security issue that has to be considered.

It was on his demand, after several incidents following the tearing down of a concrete wall on the northern side of the bridge in March 2017, that construction was halted a month later.

However, work on the roundabout connecting Kralja Petra Street with the Ibar Bridge seems to be proceeding without any problems now.

"This is easy work, what we have here, it will be done in few days," one of the workers, Latif, from Prizren, said. "We are about to put another layer of sand for levelling, and then the asphalt will go over it."

Latif has been working in construction for many years, and...