Vladimir Putin Wins Russian Elections with 76.65% of the Votes 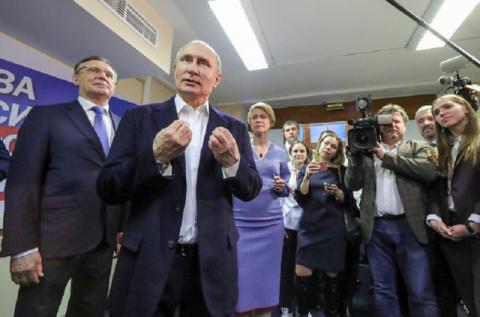 His only real challenge was to run up the tally so high that he could claim an indisputable mandate.

With ballots from 80 percent of Russia's precincts counted by early Monday, Putin had amassed 76 percent of the vote. Observers and individual voters reported widespread violations including ballot-box stuffing and forced voting, but the claims are unlikely to dilute the power of Russia's longest-serving leader since Josef Stalin.

As the embodiment of Russia's resurgent power on the world stage, Putin commands immense loyalty among Russians. More than 30,000 crowded into Manezh Square adjacent to the Kremlin in temperatures of minus-10 degrees (15-degrees F) for a victory concert and to await his words.

Putin extolled them for their support — "I am a member of your team" — and he promised them that "we are bound for success."

Then he left the stage after speaking for less than two minutes, a seemingly perfunctory appearance that encapsulated the election's predictability.

Since he took the helm in Russia on New Year's Eve 1999 after Boris Yeltsin's surprise resignation, Putin's electoral power has centered on stability, a quality cherished by Russians after the chaotic breakup of the Soviet Union and the "wild capitalism" of the Yeltsin years.

But that stability has been bolstered by a suppression of dissent, the withering of independent media and the top...