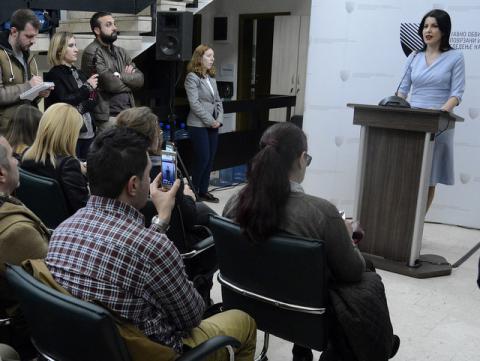 Macedonia's SJO on Wednesday said it suspects the leader of the largest ethnic Albanian party in Macedonia, the junior ruling Democratic Union for Integration, DUI, Ali Ahmeti, as well as former Prime Minister Nikola Gruevski, of spending 2.8 million euros on a census in 2011 which they later deliberately scrapped.

For the first time since the SJO was formed in 2015 and tasked with investigating high-level crime, it has listed a senior member of the DUI among its suspects.

According to Deputy Special Prosecutor Fatime Fetai, the "two political party leaders" plotted to scrap the census in 2011 for political reasons and thus cost the budget 2.8 million euros.

"Although they were aware of the harmful consequences, these persons started carrying out the census," Fetai said.

But, "when they saw that they lacked the capacity to hide the demographic facts about the country, in order to avoid responsibility, they agreed to [falsely] claim that the reasons for scrapping the census were technical in nature," Fetai added.

According to Fetai, the stated reasons were just an excuse; the real reason was that "they understood that [possible results of] a legitimate headcount operation would inflict damage on them as political leaders."

Another headcount was not held, leaving Macedonia without any relevant data about its population.

Many suspected that the real reason for the annulment of the...