Foreign Minister Ekaterina Zaharieva: The Meeting in Varna is Between the EU and Turkey, not a Bilateral Meeting 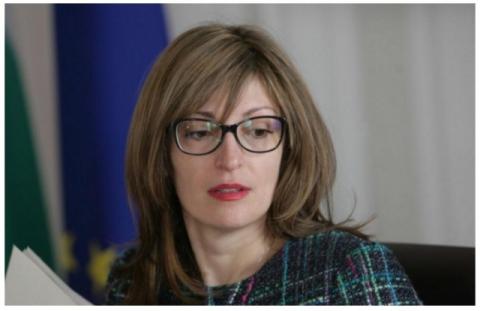 ''The meeting in Varna is between the EU and Turkey, not a bilateral meeting. I hope that there will be a dialogue which is the purpose of this meeting.'' This is what Deputy Prime Minister and Foreign Minister Ekaterina Zaharieva told bTV in response to a question whether the issue of compensation for Thracian refugees will be raised during the meeting.

"Unfortunately, for the first time, the important issue of the compensation of refugees from Thrace is placed in the context of political dividends," she added.

"The question of the compensation of Thracian refugees is a long time and always rises when we talk to our Turkish neighbors. The speculation that is currently being heard is obviously a desire to shift Bulgaria's success in foreign policy'', Zaharieva commented.

"Europe says many times to Turkey that international treaties and EU standards must be respected if Turkey wants to continue on its path to European integration. This will also happen in Varna. I do not think Europe will change its message to Turkey, "Zaharieva said.