OSCE Hopes for Talks on Russian Withdrawal from Transnistria 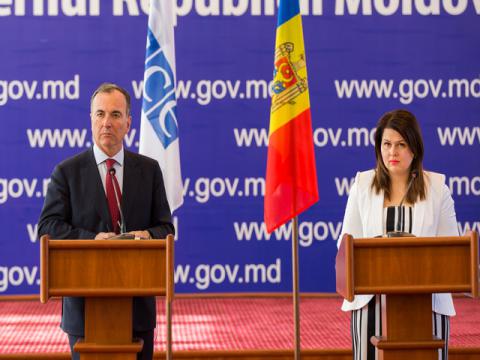 Franco Frattini, the OSCE Chairperson-in-Office's Special Representative for the Transdniestrian Settlement Process, said on Tuesday that Moldova and breakaway Transnistria must be ready to implement all their bilateral agreements by May as a precursor to possible progress on a Russian troop withdrawal from Transnistria.

Frattini told a joint press conference with the Moldovan Vice-Prime Minister for Reintegration, Cristina Lesnic, that after Moldova recognises breakaway Transnistria's car number plates, the OSCE might be able to open discussions with Moscow about a troop withdrawal.

The recognition of Transnistrian number plates will allow cars from the breakaway region to travel in Europe.

"Regarding car registration numbers, Madam Vice-President has given me the goodwill to hold another technical meeting this week [with Tiraspol] and I have asked them to come up with a compromise solution in the weeks or months to come," Frattini said.

He argued that all the eight points of the so-called 'Berlin plus' package, which formed the main agenda for the ongoing Chisinau-Tiraspol talks, should be fully implemented by May when the next meeting takes place in Rome.

Then the OSCE will have leverage to open talks with Russia on the withdrawal of its soldiers from Transnistria, Frattini said.

However, before visiting Chisinau, Frattini gave an interview to Russian state-backed channel RT in which he said that Chisinau's request for Moscow to pull its troops out was "far away from reality".

He also said that the Russian troops ensure peace in the region, as Moscow insists.

After criticism from the Moldovan authorities, Frattini told Radio Liberty that there are two kinds of Russian soldiers in Transnistria, the 'peacemakers'...