Pope Francis: Mafiosi have no Right to Call themselves Christians 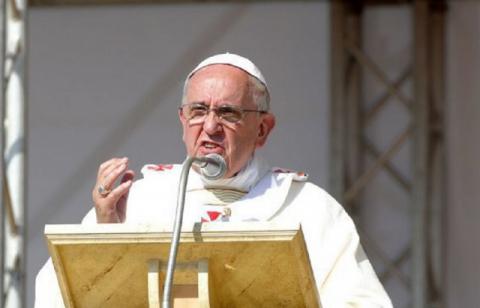 Pope Francis fired the latest salvo in his condemnation of the Italian mafia on Wednesday, telling gangsters that they "carry death in their souls" and cannot claim to be Catholics.

Speaking at his weekly general audience in St Peter's Square, the Pope excoriated mafia criminals in a discourse about "fake Christians" who, he said, claim to be pious but in fact "live a corrupt life".

"These fake Christians will end up in a bad way," he told a crowd of tens of thousands of people packed into the square.

"They have nothing Christian about them. They claim to be Christian, but they carry death in their souls. We pray for them."

Pope Francis has singled out the mafia for condemnation throughout his five-year papacy.

Many members of Cosa Nostra in Sicily, the 'Ndrangheta in Calabria and the Camorra of Naples identify as Catholics, going to church and having their children baptised.

On saints' days in towns and villages in southern Italy, processions have been known to pause outside the homes of condemned mafiosi, saluting the local don by lowering a relic or a statue of the Madonna in a sign of respect.

In one high-profile case, a procession in the Calabrian town of Oppido Mamertina made a detour and performed a "salute" beneath a flat where Giuseppe Mazzagatti, a convicted mob boss, was serving a life sentence under house arrest.

The octogenarian was not in prison because of his advanced age.

Pope Francis has called for such behaviour to end.

In an interview with an Italian newspaper in 2014, he said: "Some priests tend to...

Bulgaria’s Prime Minister Responds to President’s Criticism: “Let Him Tell Me What Money to Stop Spending”