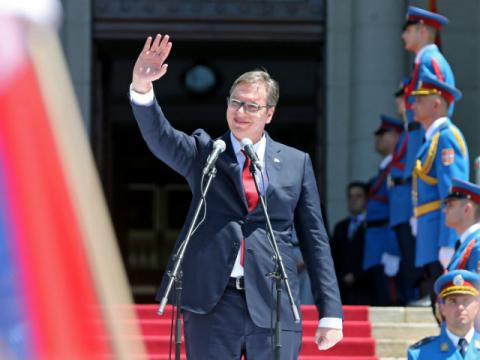 Serbian President Aleksandar Vucic remains the only head of state in the Balkan region to lead a political party, having not followed the example of his predecessor, Tomislav Nikolic, who quit the Serbian Progressive Party to assume his new office.

"The party is the foundation of authority, so if one was relieved of party leadership, they would not be able to hold the office of President," suggested political analyst Vladimir Goati, head of the Serbian branch of Transparency International.

However, according to Goati, some interpret this differently. Some say it means the head of state should not lead a political party, while others disagree.

Vucic won the April 2 presidential elections in 2017 with 55.08 percent of the vote. Critics alleged numerous abuses.

Some countries, like Croatia and Romania, have passed regulations explicitly saying that the President-elect must resign from their party, or at least suspend party membership.

Montenegro does not require the President to resign from any party position, but its President since 2003, Filip Vujanovic, is not the head of the ruling Democratic Party of Socialists, DPS, so no conflict there has arisen.

Bulgarian President Rumen Radev won the 2017 elections with the support of Bulgarian Socialist Party - but ran officially as an independent candidate.