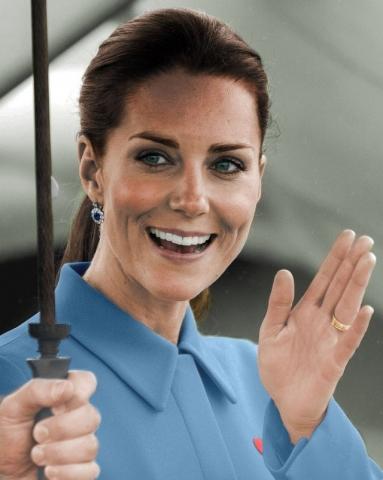 The Duchess of Cambridge gave birth to a baby boy - on St George's Day - with Prince William by her side.

Kensington Palace tweeted at 1pm: "Her Royal Highness The Duchess of Cambridge was safely delivered of a son at 1101hrs.

"The Duke of Cambridge was present for the birth.

"Her Royal Highness and her child are both doing well."

Kate fell into the early stages of labour in the early hours of this morning and was taken to hospital.

The world's media descended on the Lindo Wing of St Mary's Hospital in London to await the imminent arrival.

It was expected the birth would come soon, with Kate being in hospital with Prince George for 24 hours, and with Princess Charlotte in just 10 hours.

Kate's due date was reportedly today - which makes it her and William's first baby to be born on time as George and Charlotte were thought to be born late.

The birth comes just weeks before they are due to attend Prince Harry and Meghan Markle's wedding at Windsor Castle on May 19.

The baby now becomes fifth in line to the throne, meaning Prince Harry drops down to sixth.