Bosnia to Protest to EU over Croatia Bridge Deal 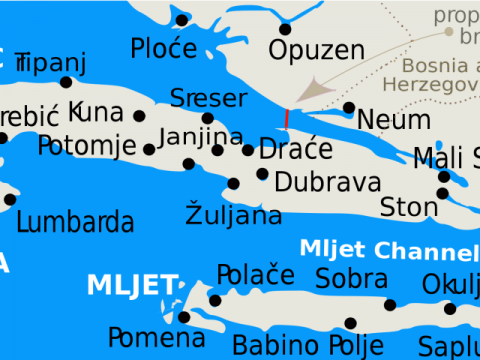 Bosnian officials reacted angrily to Croatia's signing of a contract on Monday to build the Peljesac Bridge on the Adriatic Sea coast in Dubrovnik, arguing that Zagreb must resolve its outstanding sea border issues with Sarajevo first.

"Croatia has continued the implementation of the disputed project despite all warnings, and Bosnia will inform the European Commission about that," Bakir Izetbegovic, the Bosniak member of Bosnia's tripartite presidency, told a press conference on Monday evening.

Croatia can start construction of the Peljesac Bridge only after a border agreement with Bosnia is ratified, the deputy speaker of Bosnia's House of Representatives, Sefik Dzaferovic, also told media.

Denis Zvizdic, the chair of Bosnia's Council of Ministers, announced on Monday that he will send a new letter in order to stop the construction plans.

For years, Bosnian officials have insisted that the bridge cannot be built before the two countries regulate their outstanding border issues.

The 2.4-kilometre-long Peljesac Bridge is intended to connect the Croatian mainland with the Peljesac peninsula, giving Croatia a continuous land link that bypasses Bosnian territory.

The current coastal road passes through a sliver of Bosnian territory around the town of Neum, Bosnia's only sea port.

The dispute has been ongoing since 2007 when the construction of the bridge was first announced.

Bosnian officials have constantly objected to the...