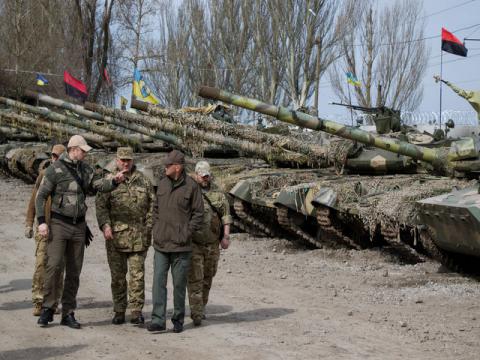 Moldova's Security and Intelligence Service, SIS, told BIRN that it has identified 62 persons from the country as taking part in mercenary activities in Ukraine since Russia's annexation of Crimea in March 2014 and in the conflict in the Eastern Ukraine between Ukrainian and pro-Russian separatist forces.

"Evidence of these persons [activities] was handed over to the Prosecutor's Office of Moldova. It is worth mentioning that 17 mercenaries have been convicted by the courts of Moldova," SIS said in an official answer regarding this topic.

A journalistic investigation by RISE Moldova also showed how Moldovan citizens have opted to fight both for the separatists in Donbass but also for Ukrainian battalions, some for the money and others for ideological reasons.

Security expert Rosian Vasiloi told BIRN that intelligence services from Moldova and Ukraine have worked together for some years to stop this phenomenon.

He added that most of the fighters come from Moldova's pro-Russian breakaway region of Transnistria and from the autonomous region of Gagauzia, but some hail from the western districts of Moldova, like Ungheni, close to the Romanian border.

"Some are former soldiers who used to be in the armed forces of Moldova, either from the Ministry of Defence, the Gendarmerie or even the police. For them, there is no need for special military training," Vasiloi added.

In July 2014, soon after Russia seized Crimea from Ukraine, the ex-KGB chief in Transnistria, Vladimir Antiufeev, became vice prime minister of the self-proclaimed Republic of Donetsk, in Eastern Ukraine.