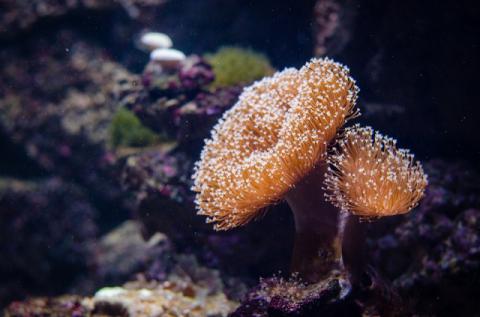 In recent years, the reef has lost 30% of its coral due to bleaching linked to rising sea temperatures and damage from crown-of-thorns starfish.

The funding will be used to reduce the runoff of agricultural pesticides and improve water quality.

Some of the money will be used to help farmers near the reef modify their practices.

Threats to the reef include "large amounts of sediment, nitrogen and pesticide run-off" as well as the crown-of-thorns starfish species, Environment Minister Josh Frydenberg said.

The reef can be seen from space and was listed as a world heritage site in 1981 by the United Nations cultural body Unesco.

There are 1,052 sites of environmental and cultural importance such as the reef on Unesco's World Heritage List.

In 2017, the organisation decided not to place the Great Barrier Reef on its official list of 55 World Heritage sites "in danger".

Unprecedented coral bleaching in recent years has caused damage to two-thirds of the reef, aerial surveys in 2017 showed.

Crown-of-thorns starfish are one of the most damaging creatures affecting tropical coral reefs as they are voracious predators that release the contents of their stomach on to the coral.

Digestive juices then liquify the coral ready for consumption. A single individual starfish can wipe out large areas of a reef.

The reef is actually a vast collection of thousands of smaller coral reefs stretching from the northern tip of Queensland to the state's southern city of Bundaberg.

Conservationists have welcomed the extra funding, but said the government needed to focus on climate change.