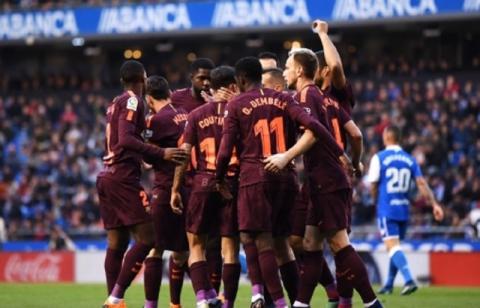 Marca - Barcelona have been crowned champions of LaLiga at Estadio Riazor with four games still left to play on the league calendar.The title, combined with the Copa del Rey, represents the club's eighth double in their history, with Ernesto Valverde and his players writing their names into Blaugrana legend with a level of domination that has never been matched before.Nobody has been able to compete with them throughout the season as Real Madrid all but gave up after a woeful start to the season, losing substantial ground early on.Valencia started strongly and kept up the pace but ran out of steam whilst Barcelona went from strength to strength. Atletico Madrid have been their closest rivals since Los Che fell away, but they have never really threatened the Catalans.At one point they were just five points behind as Valverde's side went through a blip which saw them drop points against weak rivals, such as Espanyol, Getafe and Las Palmas.That came to an end with Barcelona's victory over Atletico at the Camp Nou and ever since then their consistency with Valverde's strongest line-up has made lifting the title look comfortable.The former Athletic Club coach has stuck to his guns with few rotations throughout the campaign, even after losing Neymar and suffering a thrashing at the hands of Real Madrid in the Supercopa de Espana.

Lampič, Roglič and handball team declared best in sports in 2020