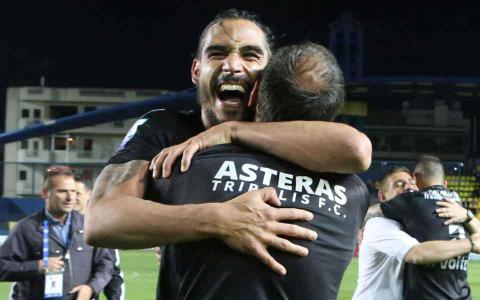 Asteras Tripolis clinched the last remaining place for Greek teams in the Europa League qualifiers as it beat Panetolikos away on Sunday, while AEK combined its celebration of its first title in 24 years with a win at Apollon Smyrnis.

AEK won 1-0 at neighboring Rizoupoli on Saturday through a Sergio Araujo goal, to take its point tally to 70 at the conclusion of the Super League season, six more than second-placed PAOK.

AEK's fans filled the Georgios Kamaras stadium of Apollon and partied for the club's 12th league title, before the convoy of the open-roof bus carrying the squad made the short trip to Nea Filadelfia, the AEK heartland, for more celebrations.

PAOK fans also filled Toumba for the 3-0 win over Platanias Hanion, chanting for their players that they are the real champions. Aleksandar Prijovic scored two of PAOK's three goals to finish top scorer of the...