Karakachanov: Our Army Is Not Just For Parades 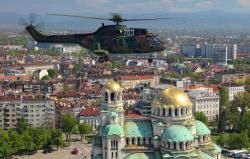 The Minister of Defense Krasimir Karakachanov believes that the Bulgarian Army performs its duties conscientiously, despite the lack of money.

"For years, nobody paid attention to the army, everyone thought that the army was only for parades, we want to show to the Bulgarian society that despite the lack of funds in the past 25-28 years, the Bulgarian army has fulfilled its obligations" Karakachanov told Nova TV.

He recalled that this year military salaries were increased by 10% -11%, and in 2019 a new raise is expected.

After our country signed a contract for maintenance of Spartan military transport aircraft at the end of the week, Karakachanov commented: "We achieved approximately with 22% lower price. ..........Thanks to this contract, the Spartans will fly, and even more than one Spartan ".

For the first time, Macedonia will join the Bulgarian parade on May 6th, according to the Deputy Prime Minister, this is a sign of friendship and good neighborliness. We will take part in the military parade in Romania.