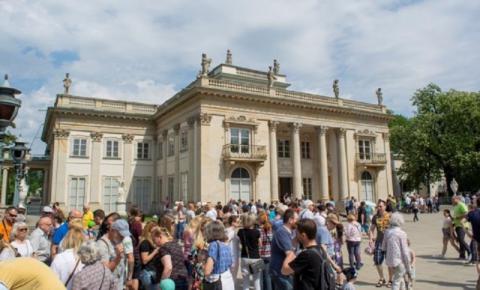 Archaeology in Bulgaria - A "long line of visitors" formed for the opening of an exhibition of part of the 4th century BC Zlatinitsa - Malomirovo Treasure, one of Bulgaria's numerous stunning treasures from Ancient Thrace, opened by Bulgaria and Poland in the Royal Lazienki Museum in the Polish capital Warsaw, the Bulgarian organizers have said.
The exhibition of gold artifacts from the Zlatinitsa - Malomirovo Treasure entitled "Insignia of Power. Thracian Gold from the Collections of the National History Museum in Sofia", has been officially opened on May 1, and can be seen until May 31, 2018.

Bulgaria's National Museum of History in Sofia has released photos from the opening which show a long line of visitors waiting to see the displayed gold artifacts from the Zlatinitsa - Malomirovo Treasure.
The Thracian "Insignia of Power" Exhibition in the Royal Lazienki Museum in Poland's capital Warsaw is going to feature only three of the artifacts from the Zlatinitsa - Malomirovo Treasure but those are three of the most impressive ones.

Namely, the gold laurel wreath of the Ancient Thracian ruler (or a ruler's young heir) featuring a depiction of ancient victory goddess Nike, a massive gold seal ring found on the little finger of the Thracian ruler's left hand, and a chain of 29 gold rosettes which were attached to a leather band placed on his head in the form of a crown.

The ring depicts scene from Ancient Thracian mythology which is known from other artifacts as well, namely, how the Great Mother Goddess offers a phiale (bowl) to the Horseman - King (also known as the Thracian Horseman) in order to make him part of the world of gods.

The exhibition of the Thracian "Insignia of Power" from the Zlatinitsa - Malomirovo Treasure has been...