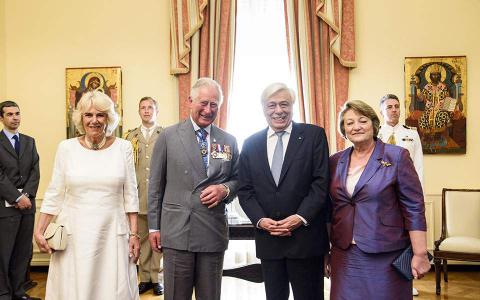 President Prokopis Pavlopoulos and his wife Vlassia Pavlopoulou-Peltsemi welcomed the Prince of Wales and the Duchess of Cornwall at the Presidential Mansion in Athens on Wednesday, as they kicked off their official three-day visit to Greece.

Speaking before the cameras, Pavlopoulos described Prince Charles' visit as "historic," saying it is the first time the heir to the British throne has come to Greece on an official visit.

"We never forget Lord Byron, [the Battle of] Navarino and the joint struggles both countries gave in two World Wars. This visit adds an important link in the chain of friendship we have had since the establishment of the Greek State," he said.

Pavlopoulos also noted Prince Charles' Greek roots through his father, Prince Philip, the Duke of Edinburgh, and expressed hope more visits will follow in the future.