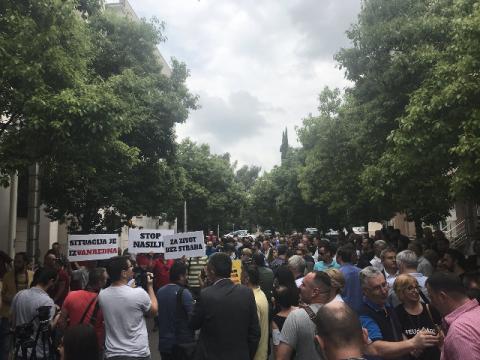 Hundreds of journalists and NGO activists protested on Wednesday in front of the Montenegrin government in Podgorica against the recent attack on the Vijesti journalist Olivera Lakic.

Lakic was shot and wounded late on Tuesday in front of her home in Podgorica.

Protesters carried banners saying "Stop the Violence", "The situation is urgent", and "For life without fear".

Vijesti's director, Zeljko Ivanovic, said he had visited Lakic and that she was feeling well and was aware of what had happened.

"She said she was surprised after everything that had happened to her since 2011," Ivanovic said. In 2012, a man in a black tracksuit struck her, also in front of the building where she lives. The attack followed a series of threats she had received since writing articles about the Tara cigarette factory and the Montenegrin Tobacco Company in 2011.

Montenegrin officials, party leaders, the media, NGOs and representatives of international organizations in the country reacted to the latest attack, urging the prosecution and police to investigate the matter and bring the perpetrators to justice.

On Wednesday, media associations and the media's self-regulation body urged the authorities to do more. "Attacks on journalists in Montenegro will not stop until those responsible in this country do not understand that last night's shots at Lakic were shots at all of us," the organizations said.

The EU delegation and the US embassy expressed concern, saying the attack on Lakic was "worrying".

The Secretary General of the Council of Europe, Thorbjørn Jagland, said he was "shocked and saddened" by the news.

"The work of journalists and free media are essential to the functioning of any democracy. Attacks on...