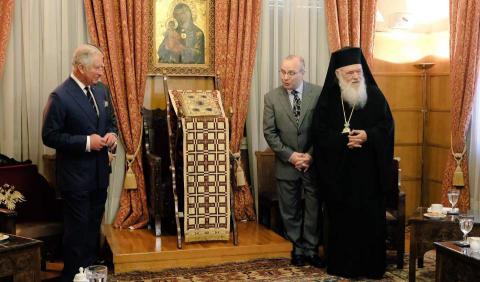 In the second day of his official visit to Greece, the Prince of Wales met with Archbishop Ieronymos II at the Archbishopric of Athens on Thursday, to discuss charity work.

"We welcome you to the land of the origin by one half of your ancestors, we welcome you to Greece with great joy. It is well-known how much you love our country, how deeply you respect Orthodoxy and this has been demonstrated as we all know by your many visits both to the holy monasteries of Mount Athos and the monasteries of Romania," Ieronymos said in his address.

"We know how deeply interested you are in the relevant research which pertains to a quest regarding issues of culture, art history and spirituality," he added and noted Prince Charles' position as the head of the Church of England.

Ieronymos conveyed his greetings to the Archbishop of Canterbury whom he thanked for the...