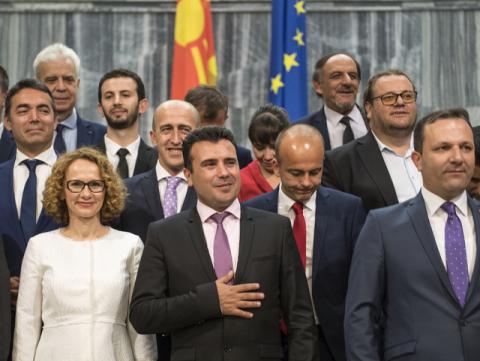 The reshuffle proposed by Prime Minister Zoran Zaev on Tuesday is the first since the election of his government last year, and will see two small ethnic Albanian parties join the ruling coalition, boosting its support in the assembly.

The Democratic Party of Albanians, DPA, which controls two MPs in parliament, will get one ministerial post and one deputy minister.

Another small party, BESA - actually the larger of two BESA factions in parliament, which controls three of BESA's five MPs - will take over the helm of the Culture Ministry.

BESA's Asaf Ademi will be the new Culture Minister, replacing Robert Alagjozoski who comes from the ranks of Zaev's main ruling Social Democrats.

BESA is also to get deputy ministerial posts in the Foreign Ministry and in the Labour Ministry.

The proposed reshuffle also envisages change in the Education Ministry where current minister from the ranks of the Social Democrats, Renata Deskoska would be shifted to lead the Justice Ministry.

The new proposed Education Minister will be her current deputy, Arbr Ademi from the junior ruling Democratic Union for Integration.

Earlier this week, Zaev told media that he hopes that the government reshuffle will pass in parliament by the end of this month.

The reshuffle, which will bring five more MPs to back the government, will ease pressure on Zaev's wafer-thin majority in parliament, where since his election in April 2017 he has relied on the support of just 61 of 120 MPs and on occasional support from several other MPs who were...