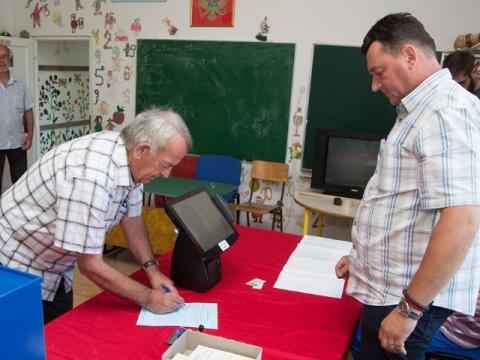 The ruling Democratic Party of Socialists, DPS, party won most votes in ten out of 12 municipalities on Sunday, but will only be able to form an administration on its own in five of them.

The preliminary results show that the DPS, run by the country's veteran leader Milo Djukanovic, secured an absolute majority in the capital Podgorica for the first time since the early 2000s.

In most municipalities, the ruling party significantly improved on its performance in local elections in 2014.

The DPS said it achieved a "great victory" in the elections, and that the results confirm the party's domination and the public's commitment to the country's EU path.

According to preliminary results, the DPS will hold 32 out of the 61 seats in Podgorica's local parliament. The opposition Democrats and URA Movement will have 17 seats and the coalition of the Socialist People's Party and the Democratic Front will hold eight.

Djukanovic's DPS also achieved an all-out victory in the municipalities of Savnik, Zabljak and Danilovgrad, Bijelo Polje and Pljevlja.

In the others, it will have to seek a coalition with the Social Democrats, SD, led by the country's parliamentary speaker Ivan Brajovic, or with the Bosniak Party and small ethnic Albanian parties.

In most municipalities, the opposition performed significantly worse than in April's presidential polls and the general elections in October 2016. It has claimed that the local elections were undemocratic and unfair.

Aleksa Becic, the leader of the now-strongest opposition party, the Democrats, said that elections were held in an anti-democratic atmosphere - problematic for a country that is a candidate for EU membership.

"We cannot be satisfied with the opposition's overall results....

Slovakia at Crossroads in Election Marred by Fake News