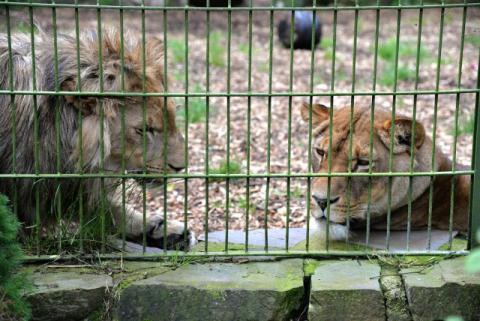 BBC - Two lions, two tigers and a jaguar have escaped from a zoo in Lünebach in western Germany, police have said.

Local authorities advised residents to stay inside their homes and call police if they see anything. A massive hunt is under way for the five big cats.

A bear had also escaped from the privately owned Eifel zoo, but was shot dead, a local official told AFP.

German media say the animals broke out after a storm overnight caused flooding that damaged their enclosures' fences.

It is not clear whether the animals at large are still on the zoo property in western Germany, but police, firefighters and veterinarians are searching the area.

Owned by the Wallpott family, the 30-hectare (74-acre) zoo is home to nearly 400 animals of 60 species, including Siberian tigers and lions.

It was first established in 1965 with only dogs, donkeys and a wild boar, according to the zoo's website, and is visited by 70,000 people a year.

Friday's escape comes two years after two lions broke out of their cages at a zoo in Leipzig in eastern Germany. One was shot dead and the other recaptured.