Euractiv: Penka the Cow - a Buzz that Eclipsed the Bulgarian Presidency 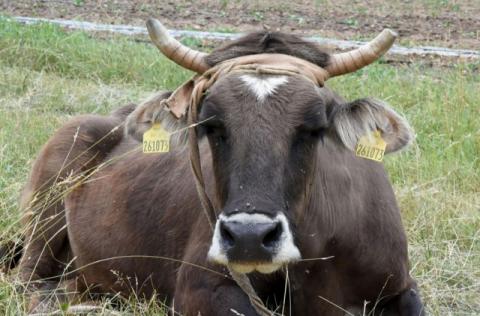 The case of Penka the cow got the unprecedented attention of the world media, so much so that a Bulgarian columnist wrote it had outshone the official highlights of the country's EU Presidency.  But it was mostly used by British tabloids, which turned it into a symbol of the blatant bureaucracy imposed by Brussels.

The clock is ticking and Penka will soon be killed unless the chairman of the Bulgarian Food Safety Agency decides otherwise. This is the last absurd touch in the history of the animal, which went on its own to Serbia for two weeks and was then returned to its owner.

In early May, the cow crossed the border between Bulgaria and Serbia in front of the Bulgarian border police, which helplessly stood by. The incident was captured by cameras at the border.

The Bulgarian Border Police service explained that its officers had first managed to push the cow back, but minutes later Penka galloped across the border and the uniformed officers had no choice but to back away. This is how the animal left the country illegally.

The cow reached the nearest town of Bosilegrad, where mainly Serbian citizens of Bulgarian origin live. Two weeks later, Penka's distraught owner, farmer Ivan Haralampyev, received a call from the Serbian police to come and collect the cow, which was recognized by its EU-standard ear tag.

But when he returned to Bulgaria with Penka, border officers asked him for standard documents proving that the animal was in good health.  As luck would have it, he had no such documents. This is how Penka ended up in the hands of the Bulgarian authorities.

The case was first reported by the Bulgarian Animal Rights Protection Organization - "Four Paws". It was then taken over by the international press, in articles expressing...