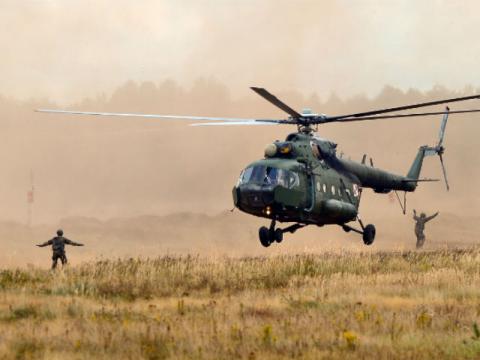 A third person on board, engineering officer Alexei Kamenov, survived the crash and was severely injured, but managed to crawl out of the wreck.

He is now in a stable condition in hospital, the Ministry of Defence said.

"Most probably the cause for the crash was a technical glitch. There is no proof of human error so far," prosecution spokesperson Roumiana Arnaudova told Bulgarian National Television on Tuesday.

"This tragedy shows that the modernisation of the Bulgarian army is an urgent matter," Karakachanov added.

Brigade General Dimitar Ivanov, commander of the Krumovo air base, told reporters at a briefing on Monday that said that the helicopter suddenly made a 180-degree turn and nosedived towards the ground. The flight staff were unable to call base to report the problem.

The crash happened around 8.30pm local time during a training flight.

The aircraft was a Soviet-made Mi-17 transportation helicopter, deployed with the Bulgarian army in 1989. It was the last of five similar helicopters at the Krumovo base that was in working order.

This type of helicopter is used for extinguishing forest fires and carries the national flag over Sofia during the annual St George's Day military parade in May.

Ivanov said that this was the helicopter's fourth flight of the day, with none of the other crews reporting any issues after completing their missions.

According to Defence Minister Krasimir Karakachanov, both pilots were very experienced, with 500-600 flight hours each.