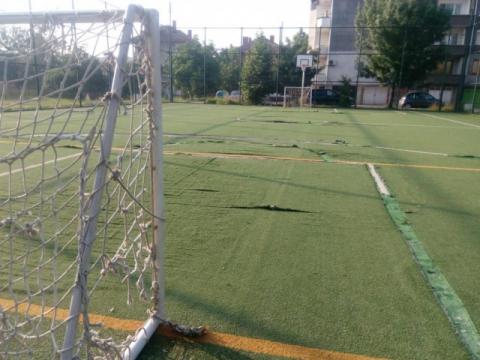 8-year-old child was injured last night during a game on the football field on Georgi Terter Street in Kyustendil. One of the doors has fallen over him.

There is no danger to his life, but he has 3 stitches on his head and after a medical exam and scans at the Kyustendil hospital he went home. He and his twin brother are visiting their grandmother in Kyustendil after successfully completed first grade in Sofia.

"The moving football goal fell over his head. I watched it him at all times, but in a matter of second he was under it. Apparently he  swung himself on the front bar (transverse beam). He played soccer with many children and was a goalkeeper. I watched him closely, but ... it happened. We took him with our car to the hospital, "told Darik the grandmother Krasimira Todorova.

The woman expressed satisfaction with the medics' concern for her grandson. "We did a scan and there are no other trauma or concussion in the brain, thank God," she said.

The football goal from the playground on Georgi Terter Street is already removed and after repair it will be returned and again fixed to the site.