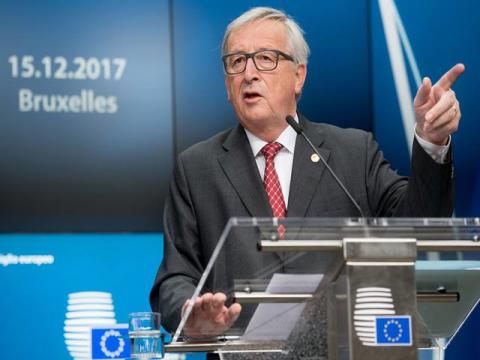 The European Commision President, Jean-Claude Juncker, apologised on Wednesday to a Romanian MEP for the appearance of the phrase "Moldovan language" on the website of European Commision - calling it a "regrettable administrative error".

Last month, in the section on the Consultation on the Future of Europe, an option allowed readers to select their preferred language of use - including "Romanian language/Moldovan language".

The Romanian vice-president of the European Parliament's Committee on Foreign Affairs, Andi Cristea, called for the error to be repaired as soon as possible.

Juncker responded on Wednesday evening, Cristea told BIRN, but the problem was fixed right after it was signalled.

"European institutions have the duty to always transmit the correct message, regardless of context. The situation regarding the Moldovan language on the Commission's website was an administrative error, quickly corrected," Cristea said.

However, he added that such mistakes must not be repeated, in order not to legitimize "dangerous narratives".

The language that most Moldovans speak remains a sensitive topic, owing to the country's tangled history.

Moldova was part of the Russian Empire, the Kingdom of Romania [between the two world wars] and the Soviet Union before finally becoming an independent country in 1991.

The Soviets, keen to stress Moldova's separate indentity from Romania, called the language Moldovan - a term still retained in the country's constitution.

The Soviets also imposed use of the Cyrillic script.

However, the Constitutional Court in Moldova in December 2013 ruled that the official language was now to be designated Romanian - the term used in the country's 1991 Declaration of Independence.