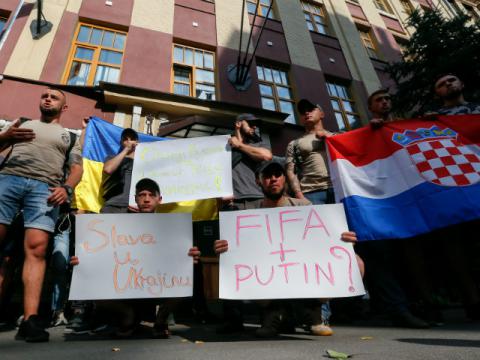 After FIFA on Monday fined the Croatian national team's assistant coach over a video in which he declared "Glory to Ukraine", Ukraine's football association has offered him a job.

"We decided to pay the fine for Ognjen Vukojevic and we will offer him a job in our association," said Andrej Pavelko, president of the Football Association of Ukraine, FSU, who is also a deputy in the Ukrainian parliament, said after coming to parliament wearing a Croatian national jersey.

Pavelko said they were studying the legal framework to help Vukojevic file an appeal at the International Court of Sport, CAS, and are planning to offer him complete legal and financial assistance.

The video sparked angry reactions from Russian politicians and from world football's governing body, which forbids any political statements. It fined Vukojevic 15,000 Swiss francs [12,880 euros] for his involvement.

In the video, posted after Croatia knocked Russia out of the World Cup on Saturday, Vukojevic and Croatian defender Domagoj Vida declare: "Glory to Ukraine!"

Both Vukojevic and Vida have spent part of their careers in Ukraine, which is locked in a bitter dispute with World Cup hosts Russia over Moscow's annexation of Crimea and its involvement in the ongoing conflict in eastern Ukraine.

FIFA said the fine took into account Vukojevic's public apology and his sacking by the Croatian Football Association, HNS, which also issued an apology.

"HNS hereby apologises to the Russian public for the actions of a member of the Croatian delegation," the HNS said in a statement on Monday.

"Ognjen Vukojevic and Domagoj Vida likewise apologise for their statements, which were in no way intended to have political connotations, yet which unfortunately left room for...