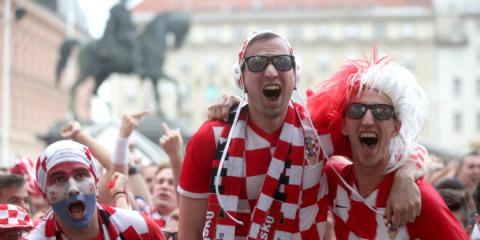 Four full charter flights are taking off from Zagreb to Moscow on Wednesday alongside regular flights to the Russian capital as Croatia's footballers prepare for their World Cup semi-final showdown with England.

Ten thousand Croatian fans are expected to attend the game at the Luzhniki Stadium, while anticipation is growing at home about the national team's potential to beat England and get through to the World Cup final for the first time in the country's history.

Red-and-white checkerboard decorations have gone up all over Croatia, and many people have been wearing various items of clothing with the same pattern.

Workers at Zagreb Holding, a public utility company in the capital, made a video of themselves telling the national team: "10,000 hardworking workers are with you!"

Some well-known retail chains, which usually have strict working hours, have decided to close at 7.30pm on Wednesday evening so their workers can watch the game.

"This is a great success for us, that we are where we are," said national team manager Zlatko Dalic on Sunday when the Croatian team beat Russia in the quarter-finals.

Dalic said it would be an even greater success if they beat England, where the domestic football scene is flush with wealth: "Imagine if Croatian football had England's money!" he said.

He cautioned however that the players are exhausted and are going into the match just days after having to play 30 minutes of extra time plus a penalty shoot-out in the game against Russia.

"This is really something special, we waited so much for it, we are now very close. We'll give the last drop of sweat to make it happen!" Mandzukic told a press conference on Monday.