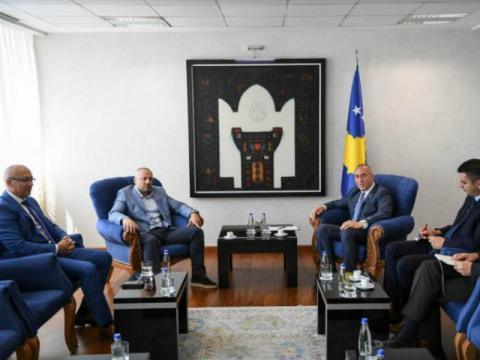 Kosovo Prime Minister Ramush Haradinaj has been criticised for again meeting  a controversial figure and power-broker in the Serb-run northern municipalities, Milan Radoicic.

The head of the Belgrade-backed Kosovo Serb party, Lista Srpska, Goran Rakic and Radoicic - who was recently elected as the deputy head - met Haradinaj at his office on Thursday.

A statement revealed few details, mentioning only that "they discussed the general situation in Kosovo with a special stress on the aspects of security, economic and social development".

Despite being the deputy head of Lista Srpska, Radoicic appeared the main focus of the meeting, sitting in the central guest seat while Rakic sat further away.

An MP from the opposition Democratic League of Kosovo, LDK, Armend Zemaj, accused Haradinaj of holding a "solemn reception" for Radoicic, referring to him as a "suspect for organised crime, extortion, violence and frightening the citizens of northern Mitrovica".

"The boss of the country's north and of dirty deals, Milan Radoicic, is welcomed in the prime minister's office," Mushkolaj wrote on Facebook.

Radoicic's name was mentioned by the late Kosovo Serb politician Oliver Ivanovic, who was murdered in January, in his last interview with BIRN, as the key figure and real power-holder in Serb-run north Kosovo.