"It was bad between US and Russia, but that's all changed" 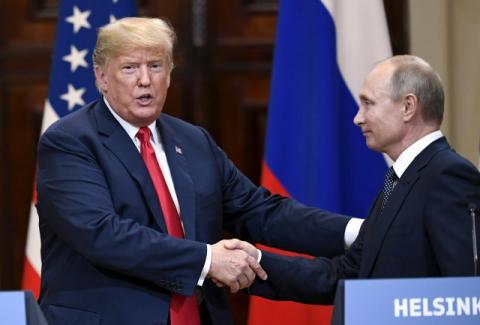 Putin assessed that relations between Russia and the United States are "in a difficult state," but hopes that the two sides will now understand each other better.

Trump pointed out that relations between the two countries have never been worse, but that "everything has changed" after the talks.

The news conference of the two presidents was held after the talks and the working lunch of US and Russian delegations in Helsinki, Finnish state television reported. Putin stressed that he did not agree with Trump during on all issues the talks and added that they also discussed Syria.

"We are satisfied with the talks. Clearly, there have been some challenges, I hope we understand each other better now," the Russian president said.

One of the topics was Russia's alleged meddling in the US presidential election in 2016, Putin said, and reiterated that Russia never intervened and would never interfere.

According to the Russian president, new problems are connected with terrorism and the global financial situation.

"As a major nuclear power, we have special responsibility when it comes to international security. I consider it important, as we discussed, to get the dialogue on strategic stability and the non-proliferation of weapons of mass destruction on track. We made a note with a number of concrete proposals on this matter available to our American colleagues," Putin said, noting that the Cold War is "long over."

According to reports, apart from Putin and Trump, all members of the two countries' delegations, and Trump's wife were present at the news conference.

Donald Trump told reporters that a constructive dialogue with Russia opens a new path to peace.

Trump said that the...