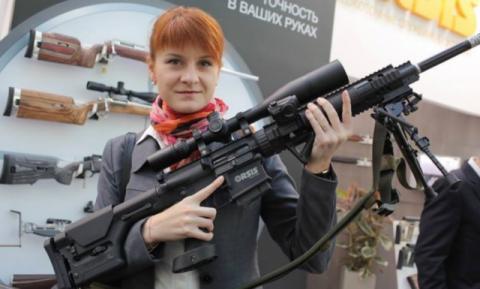 SCMP - A Russian national with alleged ties to a top Russian official was charged in federal court in Washington on Monday with conspiracy to act as an agent of the Russian Federation, and was ordered held without bond.

Maria Butina, 29, was arrested on Sunday in Washington and made her first appearance in US District Court before Magistrate Judge Deborah Robinson. Her lawyer, Robert Neil Driscoll, told the judge that Butina's residence was searched by the FBI in April, that she had testified before the Senate Intelligence Committee in a closed session several months ago, and that "we have been offering to cooperate with the government the entire time."

Butina did not speak during the brief hearing other than to state her name. A preliminary hearing was set for Wednesday.

The charges against Butina come days after the Justice Department unveiled an indictment against 12 Russian intelligence officers for allegedly conspiring to hack Democrats in 2016 and just hours after US President Donald Trump cast doubt on Russia's involvement in an extraordinary joint news conference with President Vladimir Putin.

Butina is accused of developing relationships with American politicians and a "gun rights organization," none of which are named in the affidavit supporting the criminal complaint. FBI Special Agent Kevin Helson wrote that Butina was attempting to "establish a 'back channel' communication for representatives of the Government of Russia."

The affidavit also contains apparent communications, by direct message on Twitter, between Butina and the unnamed Russian official. "Your political star has risen in the sky," the official told Butina. "Now it is important to rise to the zenith and not burn out (fall) prematurely," and they later...