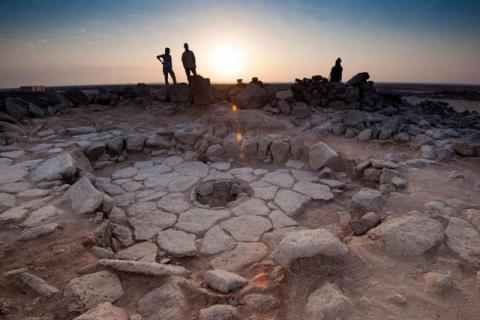 Archaeologists have discovered what appears to be the birth of sophisticated cooking - at a Stone Age site in the Middle East, dating back some 14,400 years.

Until around that time, it is likely that food was primarily consumed for nutritional purposes. Throughout most of prehistory, food gathering and processing appears to have been carried out in order to ensure that food consumption was safe and provided more energy than it cost people to make. It was essentially carried out to produce a net energy gain.

But now, archaeologists have discovered the world's oldest bread - that was cooked and probably eaten in what appears to have been some sort of ultra-early ceremonial or religious complex.

The discovery - at an archaeological site known as Shubayqa 1 in what is now desert in northeast Jordan - is particularly significant because wild cereal bread does not produce a net nutritional gain.

It would have almost certainly cost the prehistoric people at Shubayqa 1 more energy to make than they would have gained by consuming it.

It is therefore likely that it was among the very first "special" foods to be made not primarily for nutrition - but mainly for cultural and potentially social or ideological reasons.

The bread - made 3,500 years before the birth of agriculture - is from an area and a time associated with the world's oldest monumental stone buildings (constructed between 15,500 and 14,000 years ago).

The buildings - which were not typical of the majority of houses of that era - were probably constructed for communal ceremonies and rituals (perhaps including feasting associated with celebrating or commemorating the dead). The rare...