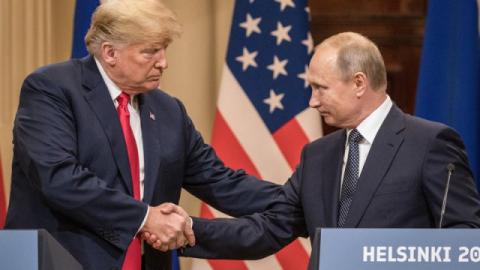 US President Donald Trump has said he holds Russian President Vladimir Putin personally responsible for Russia's meddling in the 2016 US presidential election.

"Just like I consider myself to be responsible for things that happen in this country. So certainly as the leader of a country you would have to hold him responsible, yes," President Trump told CBS News in an interview.

President Trump said that he told Russian leader Vladimir Putin during their summit in Helsinki that "we can't have meddling" in US elections.

Asked in an interview with CBS if he held Mr Putin responsible for the interference, Mr Trump replied: "Well, I would, because he's in charge of the country."

When asked what he said to Mr Putin about the issue that has dogged US-Russia ties and become a headache for the US leader, Mr Trump said he was "very strong on the fact that we can't have meddling, we can't have any of that."

"I let him know we can't have this, we're not going to have it, and that's the way it's going to be," President Trump said.

Mr Trump has been under bipartisan fire in Washington for failing to publicly confront Mr Putin over election meddling at the news conference that followed their Helsinki talks earlier this week.

Democratic politicians are pushing for Congress to subpoena Mr Trump's interpreter, amid a growing sense of alarm over the private meeting in Helsinki.

The two presidents held a two-hour closed-door negotiation with no other officials present save for the leaders' interpreters.

Democrats say the woman who translated for President Trump and the notes she took during the meeting could provide critical information about what transpired.

"We want the interpreter to come before the committee. We want to...

Pressure grows on Ankara before summit
ParliamentaryElection2020/ Until 7:00 Romanian time, over 21,500 Romanians abroad cast their vote